“All-for-one” tourism is a concept that describes integrating various attractions and industries to maximize the appeal of a tourist destination and boost economic growth.

The district was selected as one of the national demonstration areas for “all-for-one” tourism in 2016, marking new progress in its regional development.

The phrase "all-for-one" tourism has been a hot topic since Premier Li Keqiang mentioned it in the Government Work Report he delivered at the fifth plenary session of the 12th National People's Congress. He called for improved tourist facilities and services, and for a big push to develop rural tourism, recreational tourism and “all-for-one" tourism.

Shiguai is the transliterated name of the district in the Mongolian language. The name means “a place with forests”. The district ranks first for forest coverage in Baotou. It is rich in tourism resources, including Wudang Lamasery, a tourist attraction likely to soon be listed as a national 5A-level scenic area. 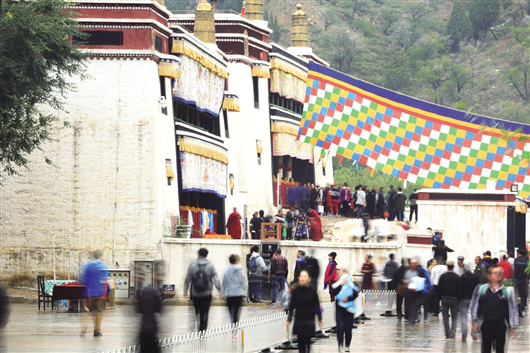 Wudang Lamasery in Shiguai district is one of the three most famous lamaseries for Tibetan Buddhism in China and is currently seeing rising numbers of visitors. [Photo/Baotou Evening News]