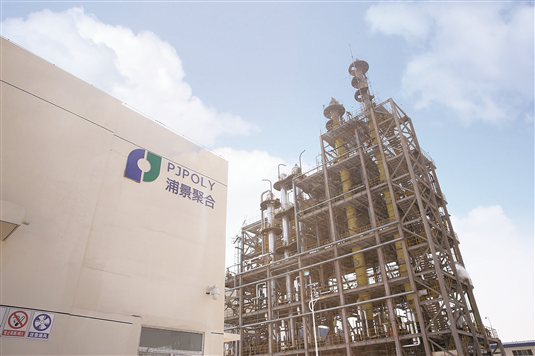 The first phase of China’s first PGA production line, which will be capable of producing 10,000 tons of PGA annually, begins trial operations in Baotou. [Photo/Baotou Daily]

The first domestic Chinese production line for polyglycolic acid – the biodegradable industrial thermoplastic used in a wide range of applications in a number of industries -- is currently having trial operations in Baotou city, in Inner Mongolia autonomous region, according to local officials.

They said the plant, which will be capable of producing 10,000 tons of PGA annually, is being trialed in Jiuyuan Industrial Park in Baotou.

The project is being funded by Inner Mongolia Pujing Polymer Material Technology Co, which will invest around 550 million yuan ($78.76 million) in the project.

PGA is a synthetic polymer material with good biodegradability and biocompatibility.

Unlike traditional polymers with stable performance -- such as plastics and rubber -- PGA will gradually degrade after a certain period of use and eventually reduce to become water and carbon dioxide that is harmless to humans, animals, plants and the natural environment.

As such, it can be widely used in oil and natural gas exploration and production, mining, for medical sutures, splints for bone fractures, medical stents and many other applications in medicine, agriculture, food packaging and a whole host of other areas.

Inner Mongolia Pujing Polymer Material Technology Co was founded in 2017 and is based in Baotou city.

The company is mainly involved in chemical technology transfers, technical services and the production and sale of catalysts.

The spokesman said his company is committed to providing an incubation platform to support technical innovation at scientific research institutes, a testing platform for various forms of technology and advanced and reliable technology for chemicals companies.